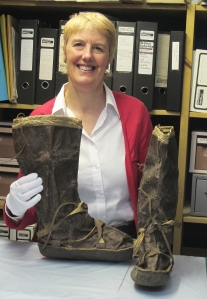 Nowadays, when winter bites, some of us wear Ugg boots to keep the chill from our lower extremities; but in the far north of the American continent, native people wear the boot from which the Ugg was adapted. Inuit and Yupik people wear the boot called either the kamik or mukluk respectively, and the Whanganui Regional Museum has an ancient pair.
The mukluk was, and still is, a soft boot traditionally made of reindeer or seal skin. Many were richly decorated, but the museum’s pair is plain and utilitarian, although stitched with a high degree of skill.
“They’re incredibly warm,” says Kathy Greensides, museum collections assistant and photographer.  “They lined them with vegetable matter, or sometimes fur. They’re made a little bigger than the foot and they use things like ferns or moss to provide a barrier and create air pockets. The lining would let moisture out and away from the skin.”
The boot uppers were made from three pieces and attached to the sole, which was fashioned from thick leather.
“The very fine stitching would be made with a bone needle and this [twine used to tie the boot firmly to the calf] would be plaited from hair. Some of them were moccasins with a separate legging.”
This particular pair was given to the museum in 1928, a time when provenance records were seldom kept, so their history – and even the donor – is unknown.  The boots are very light, allowing the wearer to move unhindered, especially good for hunters to move swiftly and quietly.
Canadian-born Kathy chose the pair of mukluk to highlight because of their North American connection. “In Canada all the girls wear the modern version of boots like these and they call them mukluks. These are the real thing. Obviously the concept works because there are loads of different companies making them. Canadians wear them all through winter.”
In the nations of the Arctic circle, the mukluk, in its many forms and under many names, is ubiquitous. “Their clothes would have been made of skins too,” says Kathy, explaining how every part of the animal would have used.  “I think they’re pieces of art; the sewing is just perfection.”

Original article appeared in the ‘Wanganui Midweek on 14th August 2013, and republished here with permission from the editors.