When we travel these days, we pack a myriad of electronic devices to enable us to always be in touch with friends and family, store photos of places we have been and short videos of our travels. Phones, laptops and tablets are the way we communicate and share now.

For Victorians travelling abroad, things were not quite that easy. Writing letters, sending postcards and drawings by post were the only ways to share their travelling experiences. To facilitate this, they would travel with wooden writing boxes, generally known as portable desks, but also called lap desks or writing slopes. These boxes held all the accoutrements needed for writing. 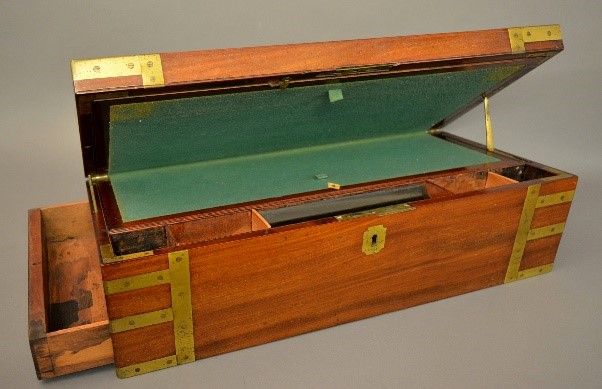 While there are records of writing boxes being used by travelling monks, the most well-known were used by officers in the British Army in the eighteenth century. These were known as campaign boxes. They had to be sturdy to withstand travelling over rough roads for long distances. They were banded with brass corners for extra protection and had steel screws to strengthen the joints. The boxes would open to reveal a leather or baize-covered double section on which to lay out all that was needed to write. Smaller compartments would hold quill pens, ink bottles, sand (for drying ink), sealing wax and a larger section for a pen rest.

Some also featured a secret drawer hidden in the bottom of the box. This was opened by removing a small discrete rod sunk into the side panel, which normally held the drawer closed. Other more elaborate hidden drawers were accessed by removing certain sections and releasing a hidden spring. These drawers were used for private or illicit correspondence, eyeglasses, snuff boxes, medicines or valuables. 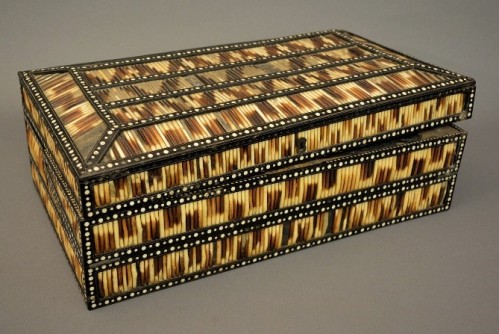 As the British ventured to Europe on their Grand Tour journeys, the writing box became more widely used. Wealthy travellers would commission bespoke designs, inlaid with marquetry or ivory, and personalised with initials or monograms. Less commonly, dual purpose boxes were made, incorporating the writing function with perhaps a sewing box or a gentleman’s shaving tools.

The Whanganui Regional Museum has a collection of portable desks made from different species of wood. One of the more unusual has porcupine quills covering its outer surface and edges of inlaid ivory dots. Inside the lid is a hexagonal motif with twelve triangular sections of different wood species and an ivory circle with an elephant motif. The rest of the inside is elaborately decorated with swirls and flowers of inlaid ivory dots. 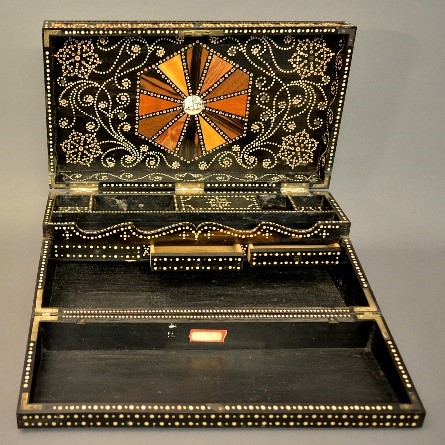 There is also a heavy wooden campaign box which has interior compartments and a pull-out drawer at one end held shut by a brass rod sunk into a side panel. One side has a hinge which, when raised, holds the lid open at different angles. This was once the property of Mr E Hardcastle, Resident Magistrate in Whanganui, 1879.

One thing that hasn’t changed over the centuries is that we still wish to keep in touch and share our experiences with friends and family. Although we can now communicate in the blink of an eye, the beauty and the practicality of portable desks make us think about a return to the gentle art of sending letters and postcards. Are we missing the tactile satisfaction of opening and reading a letter, of selecting just the right postcard to send to a friend, of using our imagination to describe our experiences when we travel; or will pen and paper eventually become a thing of the past?

Kathy Greensides, collections assistant, has come up with a selection of Japanese netsuke.  The word is pronounced net-skeh (or something like it) and they are small carved ‘toggles’ used to attach a bag or container to the (male) wearer’s obi or sash. The bag or container would be the Japanese version of the sporran, the traditional male garments not being equipped with pockets.

The first netsuke date from the 17th century and evolved from being purely practical to becoming quite decorative. Kathy says she has seen a lot of them on Antiques Roadshow, many made of ivory. Of those chosen by Kathy, two are made of wood, four of ivory, and all sculpted elaborately. “I was going through the ethnology collection and I came across them. As I said, just because I’d been watching Antiques Roadshow … they’re really valuable and quite intricately carved. Some of them were worth thousands of pounds, especially if they’ve got a signature on them.  I just thought they were really beautiful objects, and the detail … I’m a very detailed person; I like doing cross stitch and very tiny work so when I saw this I thought … it’s my kind of thing.” 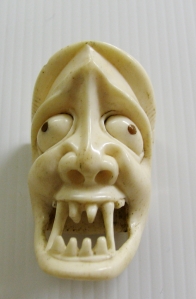 The two hardwood specimens are preserved beautifully and have a patina, which speaks of many years of use. Their carved faces shine, giving them a ‘mask’ look. Of course, they do not always depict faces but can be of many different designs, as illustrated by the ivory versions.

An internet search revealed that there is an International Netsuke Society, based in the US. It has a website and the FAQ section is especially illuminating if readers are interested.

The age and provenance of these particular specimens is unknown, but one of the ivory pieces bears writing, possibly the signature of the artist. All we know is that the museum has them, they were probably made in Japan … and that is about it. Perhaps a Midweek reader can shed more light on these netsuke?

Original article appeared in the Wanganui Midweek in January 2011, and reproduced wit permission of the publishers.

In this second and final part of a two-part series, Collections Assistant Kathy Greensides talks about part of her role as Museum Photographer and the kinds of things she does on a daily basis.

A social history collection may be defined as material evidence of people’s lives, it can tell us about beliefs, status and cast, economics and politics and it can include the extraordinary and the mundane.  Furniture, toys, vehicles; food packaging; architectural and building fragments, furniture, shop fronts and interior fittings, jewellery, cutlery, the list is endless. Below are some objects from the social history department.

This toy wagon with a driver and two horses is made of cast iron.

This katabori, ( a completely carved three dimensional work of art or sculpture) netsuke, depicts two figures carved from the same piece of ivory as the large pot and may represent a traditional Japanese story. Netsuke served both functional and aesthetic purposes. The traditional Japanese dress, the kimono had no pockets. The robes were hung together by a broad sash (obi), so items that were needed to be carried were held on a cord tucked under the sash.

The hanging objects (sagemono) were secured with carved toggles (netsuke). A sliding bead (ojime) was strung on the cord between the netsuke and the sagemono to tighten or loosen the opening of the sagemono.

This hand-made wooden model of a twelve gun Brig has eleven canvas sails and detailed rigging.  The model sits on a custom-built wooden base The brig was built by the English architect Gilbert Mackenzie Trench who designed the 1929 model police boxes which became famous as the tardis in the long-running popular BBC television programme Dr Who. 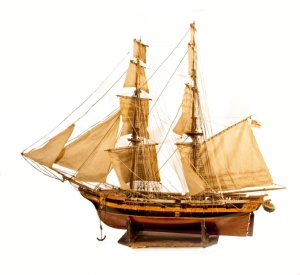 Trench, upon retiring from his position as an architect working for the United Kingdom’s Metropolitan Police, lived in Whanganui from 1949 until his death in 1979.

A selection of pipes, including: Smoking pipe Meerschaum bowl is the head of a bearded man with hand painted leaf garland around head and eyes, at acquisition said to be 100 years old; Wooden smoking pipe, carved  in Maori design with paua eyes; and a merschaum pipe carved in the image of a skull.

This is a bronze copy of an original statue of Narcissus found at Pompeii. You can see the narcissus flower in the decoration of his sandals.

Even everyday items used by New Zealand families have distinctive and packaging that is reminiscent of a bygone era.

This is a small sampling of the many varied items we hold in our collection.You can now go to our website and view a selection of collection objects online