The Watt St buildings of the Whanganui Regional Museum have been largely closed to the public for two years now and the building site hoardings came down in January. While the temporary site on Ridgway St has been busy throughout, there is mounting interest and speculation about the reopening of the principal exhibition spaces to the public. How can it take so long to get the place open again?

Opening day is scheduled for 2019, but behind the closed doors there has been a lot going on and there’s still plenty to do.

The process started in 2016 with the removal of all exhibits and furniture from the main buildings (with a few honourable exceptions on the grounds of sheer size) in preparation for the major earthquake engineering. That work, financed by the Whanganui District Council, involved installing steel supports and new walls around the whole interior of the 1928 building and similar, smaller scale alterations to the 1968 extension. Along with a new roof and a major overhaul of lighting and electrical systems, the first part of the project was finished in January this year and has created a completely revamped vessel for the Museum’s programmes and exhibitions.

Meanwhile, with the support of funding from the Lottery Grants Board, Minister for Arts, Culture and Heritage, Te Puni Kokiri and a number of philanthropic trusts, the vital collection storage areas beneath the public buildings have undergone a transformation. New vaults, shelves and storage cabinets, along with specialised climate control systems, have dramatically improved conditions for over 300,000 collection items. Dedicated store rooms have been built for photographic negatives, taonga Māori and the huge collection of natural history specimens. A building initially designed and built as an underground carpark is now a store house suitable for a collection of national significance.

Upstairs, the Museum has taken advantage of the clear-out and refurbishment to rethink all of its exhibits. With over 3,000 square metres of public space to refurbish and reinstall, Museum staff and contractors have been fully engaged since 2017 on exhibition development, conservation and preparation of thousands of objects and artefacts for display. 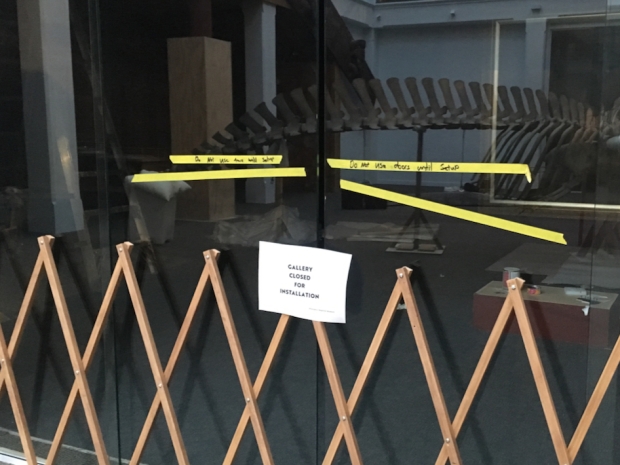 Galleries closed for installation, with a hint of what’s to come. Photograph by Frank Stark.

Ninety years of additions and alterations have been stripped out to reveal and highlight the contrasting architectural styles of the 1928 and 1968 buildings. A lot of the Museum’s heritage display furniture has been refurbished or supplemented with new joinery. New facilities including an air-conditioned gallery, an audio-visual lounge and a bigger, better souvenir and book shop have been built. The result is a completely refreshed and rethought museum, combining long-standing Whanganui icons with many items from the collections never shown before.

Regular questions about the reopening have included the fate of the sunfish, the Street, the collection of Lindauer portraits and the waka. The Museum staff are not revealing details about the exhibition contents until closer to the opening date, but promise plenty of surprises when we open.

Frank Stark is the Director at Whanganui Regional Museum.

Henry George Drew was born in 1875, the son of Catherine (nee Beatson) and Samuel Drew. His father Samuel is still a well-known figure in Whanganui, not just as the founder of the Whanganui Regional Museum, but as a scholar, a musician, a philanthropist, a creative jeweller and a successful businessman.

Henry is somewhat overshadowed by his father’s reputation, but never-the-less deserves recognition for his own substantial contribution, both to the family jewellery business and to the world of museums.

He attended Wanganui Collegiate School from 1885-1887 and then moved to Wellington to train as a jeweller, and returned to Whanganui to join his father in the family jewellery business. He was renowned as a creative and adept craftsman. The Drew premises still stands on the south side of the Bridge Block at 19 Victoria Avenue. Henry was responsible for rebuilding this shop in 1909, the previous shop being pulled down to accommodate the new. He later moved his business premises further up Victoria Avenue to Perrett’s Buildings, where it remained until the 1950s.

Like his father, Henry had a passion for natural history. Samuel Drew maintained contacts with world-renowned naturalists such as the Austrian collector and taxidermist, Andreas Reischek who, on two visits in 1886 and 1888, helped to classify his collections. At the age of 11 young Henry received lessons in taxidermy from Reischek and developed into a highly skilled taxidermist and a recognised collector of New Zealand birds, butterflies and moths.

In a 1916 letter to Amy Castle, an entomologist at the Dominion Museum (now Te Papa), he commented, “I have just been appointed Curator of Wang. Public Museum, and therefore my private collection must be reluctantly placed on one side. My duties at the Museum will take up all my spare time.”

Henry has been described as the best taxidermist produced by New Zealand. He mounted exhibits for many different museums around the country. He was especially noted for his ability to mount bird specimens in a natural way. A case of native birds, titled Morepork Under Siege, was mounted by him while Honorary Curator and was on display at the Museum for many years. It depicts a sleepy Ruru, or Morepork (Ninox novaeseelandiae), being besieged during the day by small birds that include Riroriro (Grey warbler), Tauhou (Silvereye), Miromiro (North Island Tomtit) and Piwaiwaka (Fantail). Still in the Museum collection, the diorama demonstrates the sort of natural poses that Drew was attempting to perfect.

A close-up view of Henry Drew’s Morepork Under Siege, showing the birds in natural poses. Ref: 1916.66

In 1924 he produced a collection of 350 birds for display at the Wembley Exhibition in England. This included eleven blue penguins which were kept at his home for a few weeks by his two children before being killed and mounted for display. He also mounted a large brown bear that came to Whanganui in a travelling circus.

Henry Drew retired from the family jewellery business in 1949, leaving his son Frank in charge.

Libby Sharpe is the Senior Curator at Whanganui Regional Museum

Today the Whanganui Regional Museum celebrates the birthday of its founder. Samuel Henry Drew was born in Maidenhead, Berkshire, England, on 17 November 1844. The Drews migrated to Tasmania in the early 1850s and then to Nelson in 1860. Samuel established a successful jewellery and watch-making business in Whanganui in 1864, which continued to be run by his descendants until the 1990s. The Drew building is still standing in Victoria Avenue.
Drew married Catherine Beatson in Nelson in 1872 and the couple came back to Whanganui where they raised their eight children. He had a wide range of interests including music and sport. He was a member of the Philharmonic Society, the conductor of the Wanganui Liedertafel (the Male Choir) and president of the Wanganui Orchestral Club, and also belonged to the Wanganui Rowing Club. His greatest passion, however, was the study of natural history. 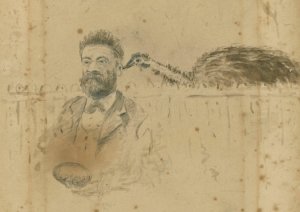 Samuel Drew collected natural history specimens and Māori artefacts, eventually establishing his own museum in his home in 1880. His family helped to collect and classify his specimens of molluscs, birds, beetles, fossils and other fauna. His collecting activities extended as far as Kāpiti Island where he became something of an authority on the local birds and fish.

Drew devoted his spare time to his private collection, furnishing specimens for collections throughout New Zealand. He published articles on natural history in the Transactions of the New Zealand Institute and was made a fellow of the Linnaean Society in 1897. Drew maintained contacts with world-renowned naturalists such as Andreas Reischek who, on two visits in 1886 and 1888, helped to classify his collections. Reischek also trained Drew’s son, Henry, as a taxidermist.

The private collection eventually began crowding out Drew’s family home and he realized he would need to find larger premises to house his museum if he wished to continue collecting. He also recognized the importance of his collection and the considerable public interest in it. For these reasons he offered the collection to the town to form the nucleus of a public museum.

Exterior of the Wanganui Public Museum on Wicksteed (Drews) Avenue

Drew’s collection was purchased in 1892 for a nominal sum, and through his efforts a new purpose-built museum was erected in Wicksteed Avenue, now Drews Avenue, to which his collection was transferred. He was appointed Honorary Curator of the new Wanganui Public Museum and continued to collect, using his expertise to mount natural history specimens and organise displays.

Samuel Drew died from a sudden heart attack at his business premises on 18 December 1901 at the age of 57 years. The Whanganui Regional Museum is a lasting reminder of the enterprise, expertise and dedication of this extraordinary individual. Whanganui will remain indebted to this man for the contribution he made to recording and collecting the cultural and natural heritage of this region, as well as founding an institution of national and international renown.

Trick photograph of Mr Drew pushing himself in a wheelbarrow

He was always ready to devote his very limited leisure to the advancement of musical and scientific matters in Wanganui, and has left in the Wanganui Museum a fitting monument which will serve to preserve his memory and demonstrate what even one earnest and capable worker can do, when his heart is in his work … (From the Wanganui Herald 18 December 1901)

space
The Museum’s Board voted to create a permanent memorial in tribute to Samuel Drew. One of the trustees, Mr Empson suggested a marble bust of Drew and said, “There is no place fitter for a bust than the Museum, and no bust fitter for the place.”